This article was originally posted on Codementor.io.

The full code for this Tutorial can be found at https://github.com/mattgoldspink/swift-parse-login-part1

First impressions are everything, so when users download your app, you have to make sure that the first screen they see lets them know this app means business. Setting up a proper signup/login process used to be very tedious and time-consuming. Now you can kiss those long hours spent on setting up the login screen goodbye thanks to Parse, which offers a great platform to handle signups and integration with Facebook and Twitter for free.

In this tutorial, we’ll look at how to setup a custom Login and Signup view, so you can get users signed up with minimal effort. I will show you how to get all the configuration setup using Parse’s default Login and Signup views. Once you have completed the setup, check out Part 2 of my Parse tutorial to see how we can customize the styles to make your app really stand out!

For the purpose of our tutorial, we’re going to create a social network called “Vay.K” for people who want to share photos from their vacations.

1) Setting Up Our Project in XCode

The one thing that we need to note here is the Bundle Identifier – in my case it’s com.mattgoldspink.VayK 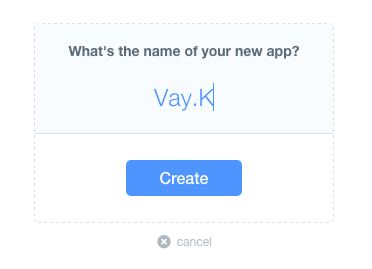 Once your app is created click on the Cog in the top right and choose Settings. On this next screen choose Authentication from the menu on the left and you’ll see the following: 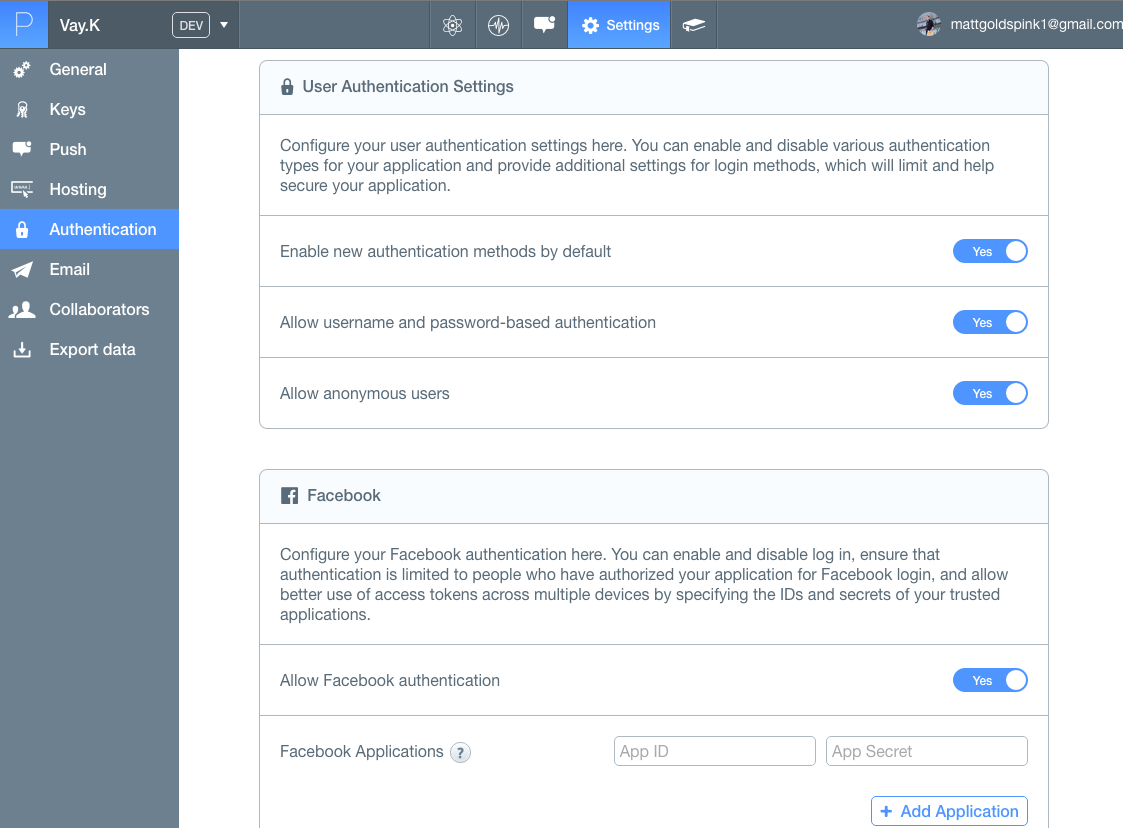 Now we need to go and set up a Facebook App.

Head to http://developer.facebook.com and sign up as a developer. Again, once you’re logged in, go ahead and add a new app.

Be sure to pick iOS as the platform 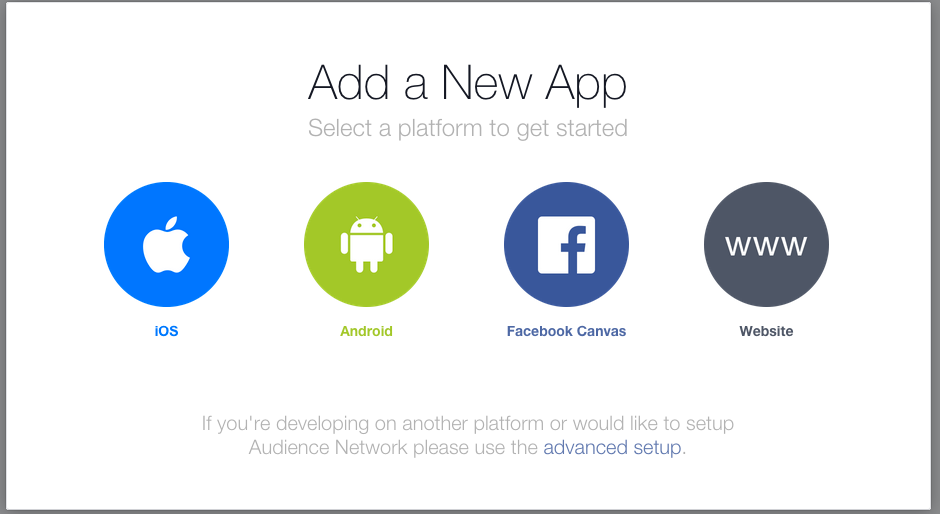 On the next page, you’ll be presented with setup instructions. Skip straight down to Configure your info.plist. You’ll need to copy the XML snippet they give you and add it into the bottom of your info.plist (it should be in the Supporting Files folder in Xcode). Make sure to right click it and choose Open As Source Code. 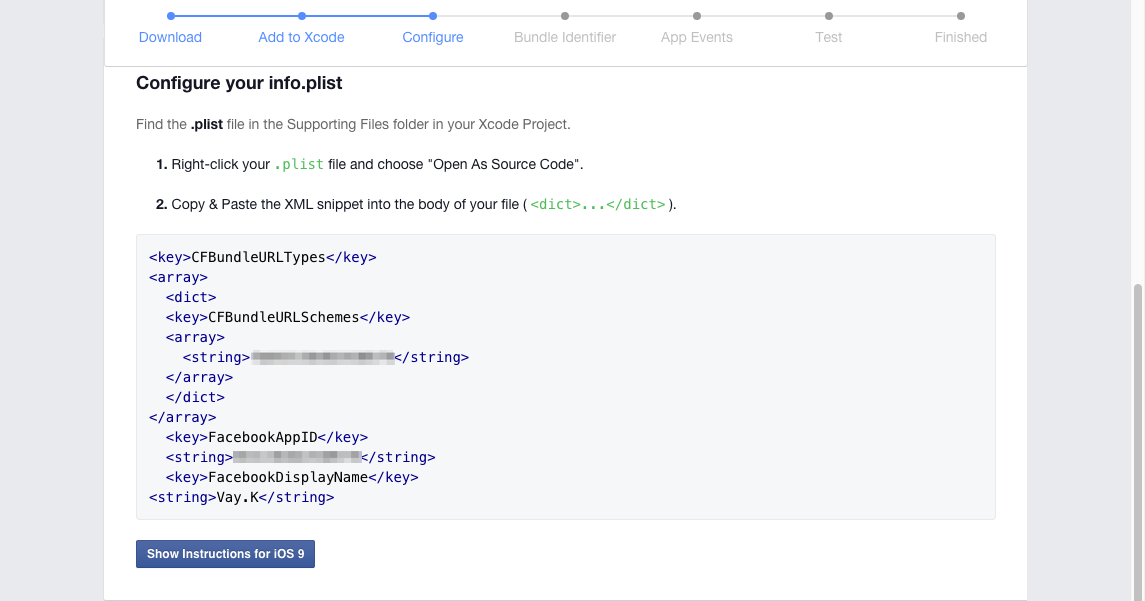 With this done, scroll all the way back to the top of this page and click Skip Quick Start. You should now be able to see your App ID and App Secret (click Show)

Head back over to Parse where we left off, and fill in the blanks for Facebook Auth. If all goes well when you add them, you should see a nice blue tick next to it. 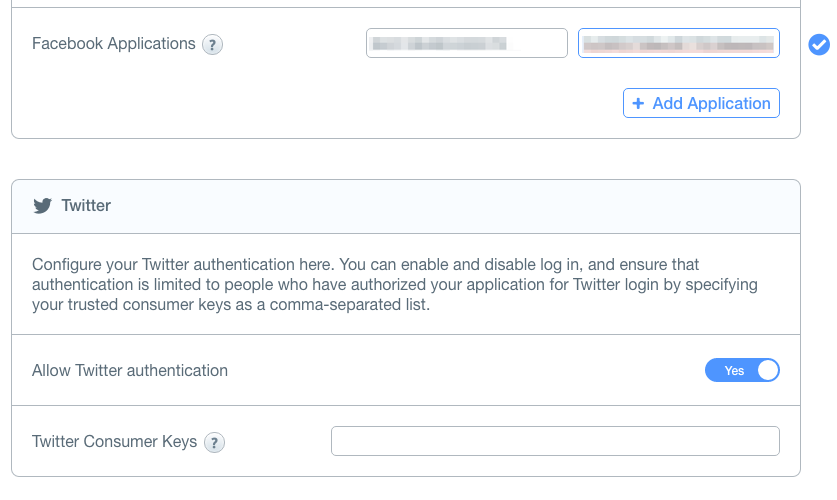 Next, fill in the app details. It’s important for the Callback URL to be filled in with something, even though it isn’t marked as a mandatory field. Check the developer agreement and then click Create your Twitter application 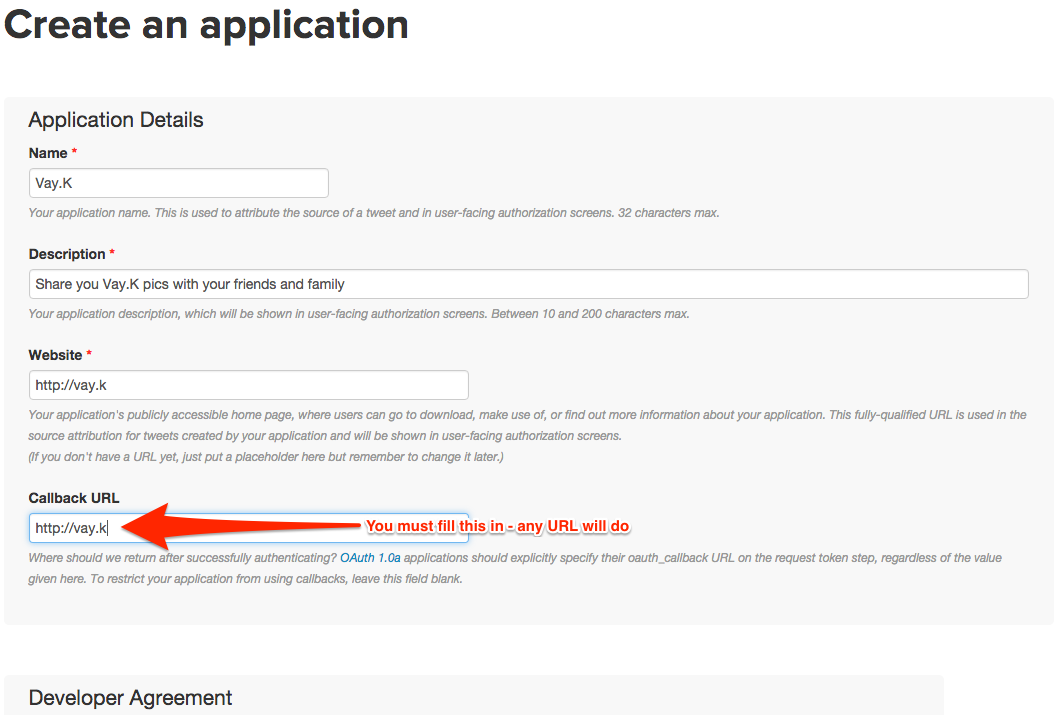 Once that is done, you’ll be presented with the App Details screen from which you can copy the Consumer Key (API Key) 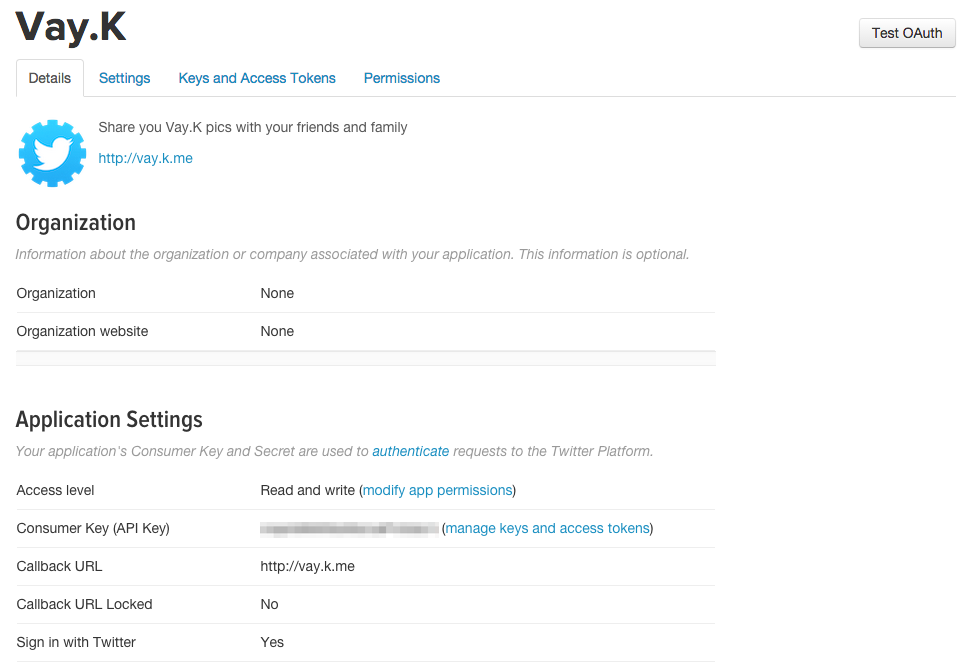 And finally let’s jump back to Parse.com and fill in our missing Twitter piece – again if it’s all good then you’ll get a nice blue tick.

I recommend using CocoaPods to manage the dependencies. If you haven’t used it before you’ll need to install it. Open a Terminal and type:

Inside of that paste the following:

Changing VayK to the name of your project. Switch back to your Terminal and navigate to the directory which contains your project and run: 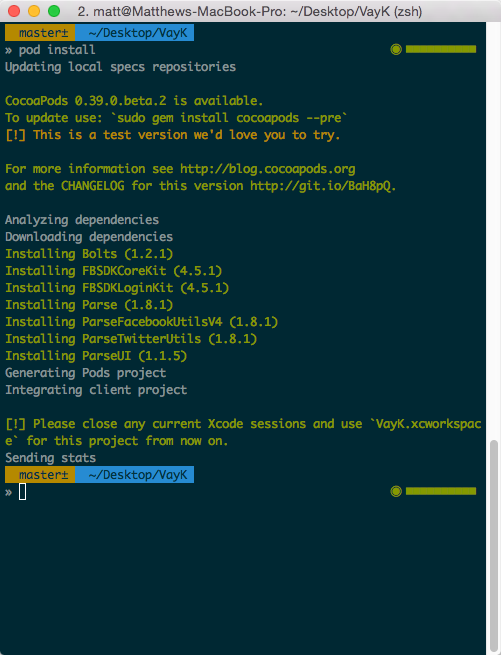 This will create a whole new Xcode workspace for you, so first close your project in Xcode, then re-open XCode with the file named . While opening this, you should find both your original project and a new one called Pods 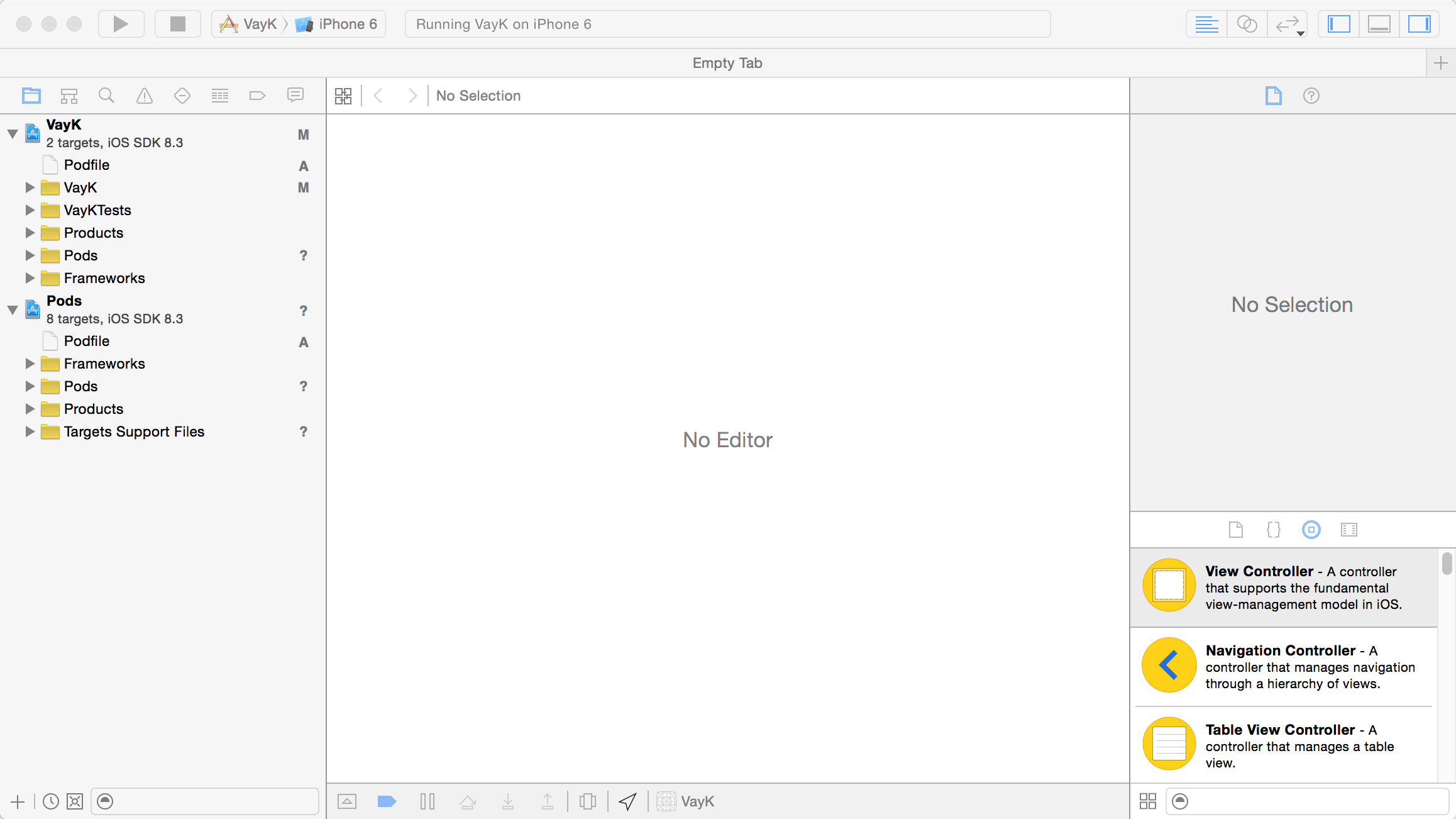 This second project includes all the dependencies we just listed in the Podfile ready for us to use! The one last piece before we start churning out code is to create a bridging header so that these Objective-C frameworks can be used by Swift.

Inside your project, create a new Cocoa Touch file. Make sure it’s an Objective-C file (NOT a Swift file). When you come to save, you’ll be issued a prompt asking if you want to configure an Objective-C Bridging Header – choose YES. Then delete the .m and .h file that were added and jump straight to the new file at the bottom of your project which should be called something like VayK-Bridging-Header.h

Open it up and paste in the following:

Quickly build and run the project and ensure there are no errors. You should see it compiles all the frameworks we installed using Cocoapods before it starts to compile your project. If it compiles and runs (you won’t see anything on the simulator yet), then we’re in great shape to start writing some real code!

The first thing to do is to make sure we configure our connections to Parse, Facebook and Twitter, so that we can add the login and signup screens their servers can authenticate for our app. Firstly paste the following code into the AppDelegate.swift file:

The application:didFinishLaunchingWithOptions configures Parse. To get your Application ID and Client Key on the Parse.com page for your app, click Keys

Then we configure PFTwitterUtils to get the Consumer Key and Consumer Secret. To do this, go to your twitter app in the browser and click the Keys and Access Tokens tab

Notice how there are no keys for Facebook? Well, you actually did that earlier in step 2 when you edited the plist file. So here we can now just initialize PFFacebookUtils with any launch options.

In the AppDelegate, we also add 2 other hooks for Facebook. The first is application:openUrl:sourceApplication:annotation. This function is called when we jump out to the Facebook app or Safari to log the user in and then re-enter the app. The second function applicationDidBecomeActive allows the Facebook SDK to track app usage.

5) Configuring our ViewController to launch the Login screen

So in our ViewController we want to do the following for now:

So let’s start – first paste the following into the ViewController.swift file:

Here we implement ParseUI’s PFLoginControllerDelegate. Then in the viewDidAppear we check if the currentUser() is empty and if so, we create an instance of the ParseUI PFLogInViewController, set our self as the delegate and present it. If you run the app you should see the following: 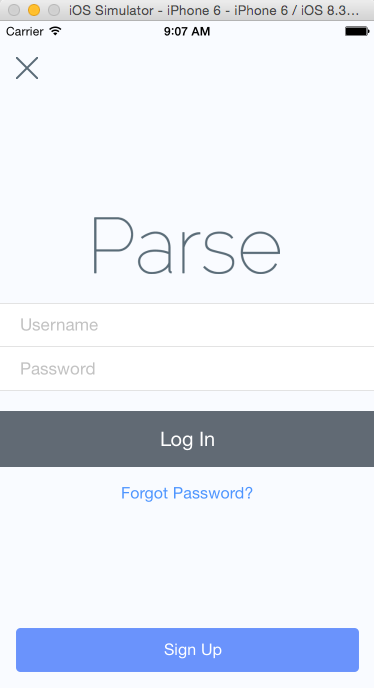 This is pretty cool, right? We hardly wrote any code and we already have a log in screen with a signup button (try it out!). But we want to customize this a little more:

To do this, we modify our viewDidAppear by adding the following two lines before presenting the view controller:

The first line is the way to customize which fields/buttons PFLoginViewController will render in the View. Then, we tell Parse we want our users to simply use their email address as the username instead of having a separate username as well.

Notice how when you re-enter the app nothing happens? Let’s fix that so we show that the user is logged in using a simple UIAlertController.

Add a new function to your ViewController.swift to present a UIAlertController:

Now we need to call this from two places. The first is in viewDidAppear – if the user is already logged in, we can skip presenting the LoginViewController:

And the second place we need it is after the user logged in. For this we’ll implement our first PFLoginViewControllerDelegate method:

Now if you relaunch the app, you should see the alert appear straight away because you just logged in (assuming you tried out the Facebook/Twitter buttons). Parse is smart enough to keep the user logged in for us! Now let’s pretend it’s a fresh install by resetting the Simulator (use Reset Content and Settings in the iOS Simulator menu):

Now we only have one piece missing- when using Sign Up button, nothing happens. To fix this we’ll make our ViewController.swift also implement the PFSignUpViewControllerDelegate protocol:

Now before we present the LoginViewController in viewDidAppear add our self as the delegate to the SignUpController:

And finally, implement the signUpViewController:didSignUpUser delegate method like so

Our final ViewController code is just short of 40 lines!

In the next tutorial, we’ll build on this and convert Parse’s default Login and Sign Up view’s to something any startup would be proud of!

If you need any help with anything found in this tutorial feel free to reach out to me on Codementor and I’d be happy to help!

_The full code for this Tutorial can be found at https://github.com/mattgoldspink/swift-parse-login-part1_